The Fight Against Fake Products - Actions by Panasonic - 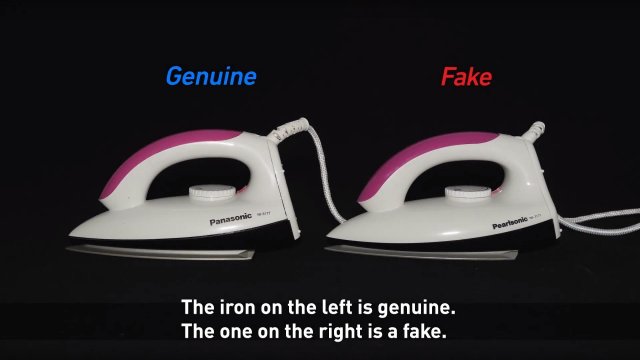 Do you know the fear of fake products? Panasonic, for which 2018 marks its 100th anniversary, has continued to deliver a diverse variety of products to customers around the globe while simultaneously accumulating a history of battling fake products. Fake products not only cause quality problems that lead to accidents and injuries among customers; they also result in economic losses to society as a whole, and prevent the building of a healthy society. Panasonic believes it is a corporate duty to eliminate fake products, and is engaged in a variety of measures to achieve this goal in view of SDG's (Sustainable Development Goals) as well.

Making its first appearance in this video is Panasonic's iron performance testing lab. While this iron initially appears to be problem-free, within a few minutes it begins to burst into flames. Actually, this iron is not manufactured by Panasonic. It's a fake product. This shocking video shows a fake product that was circulating around overseas markets and was brought back to Japan. It was tested to see what would happen if the thermostat that controls the temperature were to malfunction.
This fake product was not equipped with a safety measure in the event that the thermostat malfunctioned. In such a case, the temperature would continuously rise until it burst into flames. On the other hand, with a Panasonic iron, even if the thermostat were to break, the temperature fuse would function and prevent the temperature from rising above a certain level.

It is generally said that about 80% of all fake products are manufactured in China. As EC sites develop, they are disbursed all around the world more easily than used to be. In recent years, they expanded beyond products for consumers to include specific BtoB products. Fake products are identical to genuine products in their appearance, packaging, logo, model number, and other aspects. Among them, some actually have the Panasonic brand. Also, recently, people dealing in fake products use a variety of methods to trick customers into believing that fake products are authentic Panasonic products, and they use various means, including advertisements and sales methods that make it difficult to immediately determine that the products are illegal. These fake products do not have an inquiry contact listed in the User's Manual, so it is clear that they do not intend to take any responsibility for the customer's safety.

In order to prevent damage to customers and society in general due to fake products, Panasonic works with authorities at various stages of distribution, including production, import/export, wholesale, and sales. From the exposure of fake factories to customs, a variety of measures are employed to eliminate fake products.

Panasonic has delivered high-quality products for more than 100 years, and its brand is evidence of the reliability and satisfaction of the customers and society in general. As such, Panasonic takes a firm attitude with those who would illegally display the valuable asset that is represented by its brand to eliminate fake products.

Disclaimer:
We would like to note that Panasonic Newsroom is not a place to address personal Customer Service issues. Even though this is not the forum, Panasonic is always eager to resolve your concerns. Our local customer services contacts can be found at Global Support or you can see our list of Social Media Accounts to find the right channel for your queries and concerns.