Searching for Players to Appear with Neymar Jr. in a Special Movie Slated for Production!

All who applied have the opportunity to be selected to appear in the special movie! Try your own hand at emulating Neymar Jr.'s crazy skills so that you too can live the dream of appearing with him! 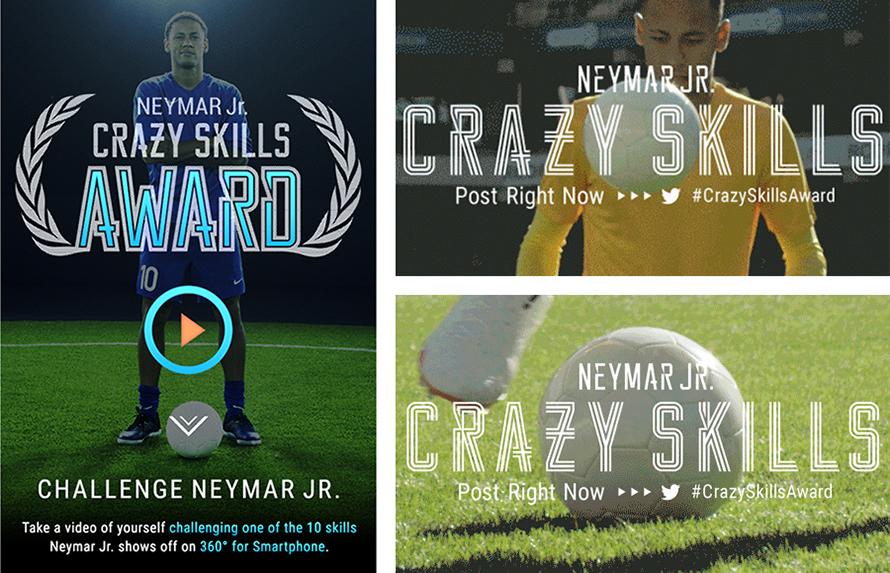 Osaka, Japan - Panasonic launched the "NEYMAR JR. CRAZY SKILLS" project with the intention of using Panasonic technology to support children the world over who "want to be as good at football as Neymar Jr." At the end of 2015, "360° OBSERVATION CAM" which enables people to view crazy skills of Neymar Jr. from angles across 360 degrees on smartphones and PCs, that can also be enjoyed in slow motion and with a close-up view of the legs of the footballer, was launched on the website (https://crazyskills.panasonic.com). The launch of "NEYMAR JR.'s CRAZY SKILLS AWARD" has entailed the screening by Neymar Jr. of videos submitted by applicants the world over who have tried their hand at emulating the crazy skills of the renowned footballer.

One year has passed since we began activities for the "NEYMAR JR. CRAZY SKILLS" project and as a culmination to this a special movie has been slated for production. Neymar Jr. appears along with the "NEYMAR JR.'s CRAZY SKILLS AWARD" applicants in the video to send out thoughts to the people in the world whose goal is to obtain "CRAZY SKILLS".

All who post will have the opportunity to be selected to appear with Neymar Jr.!
The search is on worldwide for players with "CRAZY SKILLS"!

A worldwide search will begin for those who wish to appear in this special movie with Neymar Jr. For those who wish to co-star in the movie, simply film a movie of the applicant performing the crazy skills that have been featured in "NEYMAR JR. CRAZY SKILLS" and upload the video to Twitter with the hashtag #CrazySkillsAward, which could lead to the once-in-a-lifetime opportunity of appearing alongside of Neymar Jr. There are no qualifications necessary for eligibility and applicants can submit multiple "crazy skills" videos.

* Please see the "NEYMAR JR. CRAZY SKILLS" website for details.
* Those who have previously submitted videos for "NEYMAR JR.'s CRAZY SKILLS AWARD" screening will be considered eligible, and have the opportunity to be selected for appearance in the movie.

The "NEYMAR JR.'s CRAZY SKILLS AWARD" winners have been announced for January through March!
Neymar Jr. has done the selecting and provided commentary!

From a worldwide field of applicants who emulated the crazy skills of Neymar Jr., the four winners of the "NEYMAR JR.'s CRAZY SKILLS AWARD" for the months of January through March were announced on Wednesday, May 11, 2016. The winners successfully performed numerous skills that exceeded the examples provided by Neymar himself. The videos of the winners are featured at "NEYMAR JR. CRAZY SKILLS" (https://crazyskills.panasonic.com) and the Facebook and Twitter accounts of Neymar Jr. along with words of lavish praise and encouragement from the football star.

On the "NEYMAR JR.'s CRAZY SKILLS AWARD" website, scenes of Neymar Jr. checking "Crazy Skills" videos submitted from all over the world are available for viewing. You can hear him rooting for the performers with comments such as "Just missed being perfect!" and "Oh man, this is incredible!" As he focuses intensely on the submitted video clips, he indicates surprise at how skillful the applicants are. Viewers can also appreciate how high Neymar Jr. sets the bar, giving advice such as "The important thing is daily practice. If you don't get this down in daily practice, you won't be able to pull it off in games." After screening the videos, he gets together with friends and a soccer ball in order to have fun demonstrating the "crazy skills," a valuable glimpse of the footballer off the pitch.

Disclaimer:
We would like to note that Panasonic Newsroom is not a place to address personal Customer Service issues. Even though this is not the forum, Panasonic is always eager to resolve your concerns. Our local customer services contacts can be found at http://www.panasonic.com/global/support.html or you can see our list of Social Media Accounts to find the right channel for your queries and concerns here http://news.panasonic.com/global/socialmedia/.

Capturing the Country's "Beauty" in 4K. Six Years in the Making - "Beautiful JAPAN towards 2020"

Panasonic has spent the last 6 years capturing Japan's beauty in anticipation of the Olympic and Paralympic Games Tokyo 2020. The project, "Beautiful JAPAN towards 2020" explores all 47 prefectures in Japan, and captures their breathtaking beauty together with images of young inspirational athlete...
Mar 24, 2020
Category:Others, Sponsorships

After careful review of presentation in the Regional Qualification, Panasonic is pleased to announce regional representatives from qualification in Tokyo, Beijing, Paris and Los Angeles. Each team will start to prototype the ideas with Panasonic team from February 2020. Updates along their work jou...
Feb 07, 2020
Category:Exhibitions/Showrooms/Events, Sponsorships